Food isn’t just sustenance. We don’t eat food just for the sake of eating or living. Sometimes, we eat because we are just not able to forget the taste of that particular dish. Other times, we eat food just because it tastes great. But sometimes…just sometimes…we eat something that makes a statement that forces us to think, and THAT is when food becomes an art!

Housed in downtown Edmonton, hidden in plain sight, is the restaurant, Indian Fusion: The Curry House. When you step in through the door, you are immediately transported to a cave-like setting. The restaurant is small, housing only 30 customers, but there’s something different about every corner of the restaurant.

The decor is very bizarre but in a good way. The restaurant houses traditionally handcrafted cloth wall hangings, expensive Indian paintings depicting the queens, the royal courts, and majestic elephants. There are many antique statuettes of Buddha and of Bodhisattvas, as well as many gods and goddesses of Hinduism. Every single table is made from different wood and has its own history. All the wood is reclaimed and is at least a couple of hundred years old.

I was greeted with old Bollywood music from the 80s and 90s, adding to the setting’s ambiance. The decor was slightly confusing as there were bushes, birds, and snakes hanging from the ceiling. That just added to my understanding of the cave-like setting. You could see a beautiful spice rack that reminds you of a mad scientist’s chemical rack; the lights reflected off the glass jars. The decor seemed like a random jigsaw puzzle; the more I looked around, the more I found. 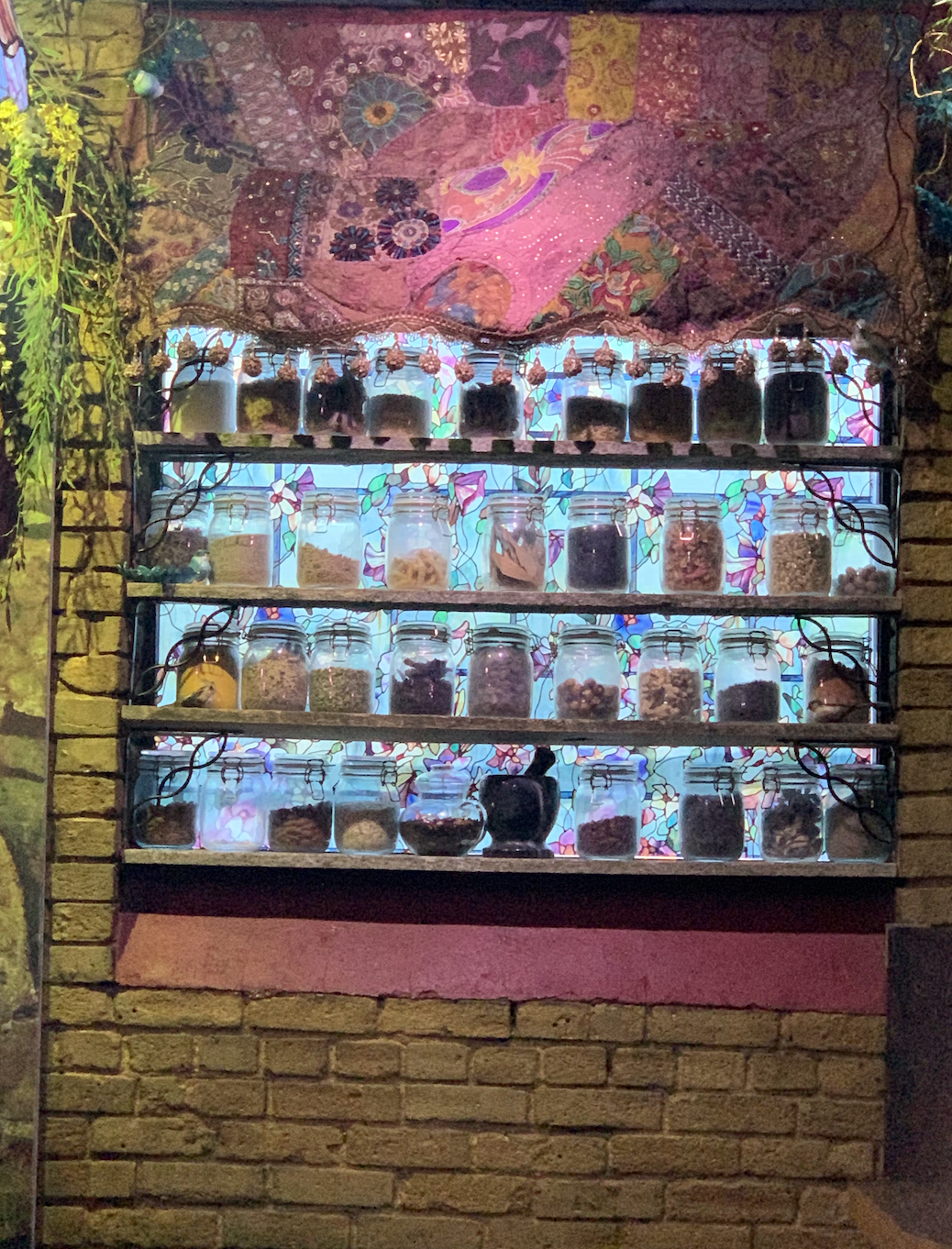 My friends and I were immediately greeted by a friendly waiter who took us to our seats and served us a copper jug of water and our menus. The menu had a black and red theme and was adorned with photos of their dishes and spices. They serve an entire line of wild game and exotic fusion dishes that you will seldom find in Indian restaurants in Edmonton.

We ordered a Crocodile Tikka Masala and Jackfruit Masala for our entrees, as well as some Garlic Naan and Vegetable Biryani. It was slightly chilly outside, so we decided on a piping hot pot of masala chai to warm us up.

For every dish, the server asked us the spice level we wanted from 1 to 5. We stated 3 or 4 for all the dishes. We were excited as well as scared to taste some of these items. This would be my first time even trying crocodile, and to have it made with Indian spices, it’s a very unique concept.

We didn’t have to wait long. The chai came in 10 minutes, and the rest of the food in about 20 minutes. The food was hot, and the aroma of the spices filled the entire restaurant. The portion sizes were way bigger than what I’ve usually had in other South Asian restaurants in Edmonton. The cups and plates were all made of ceramic and were in a multitude of colors in a random theme. 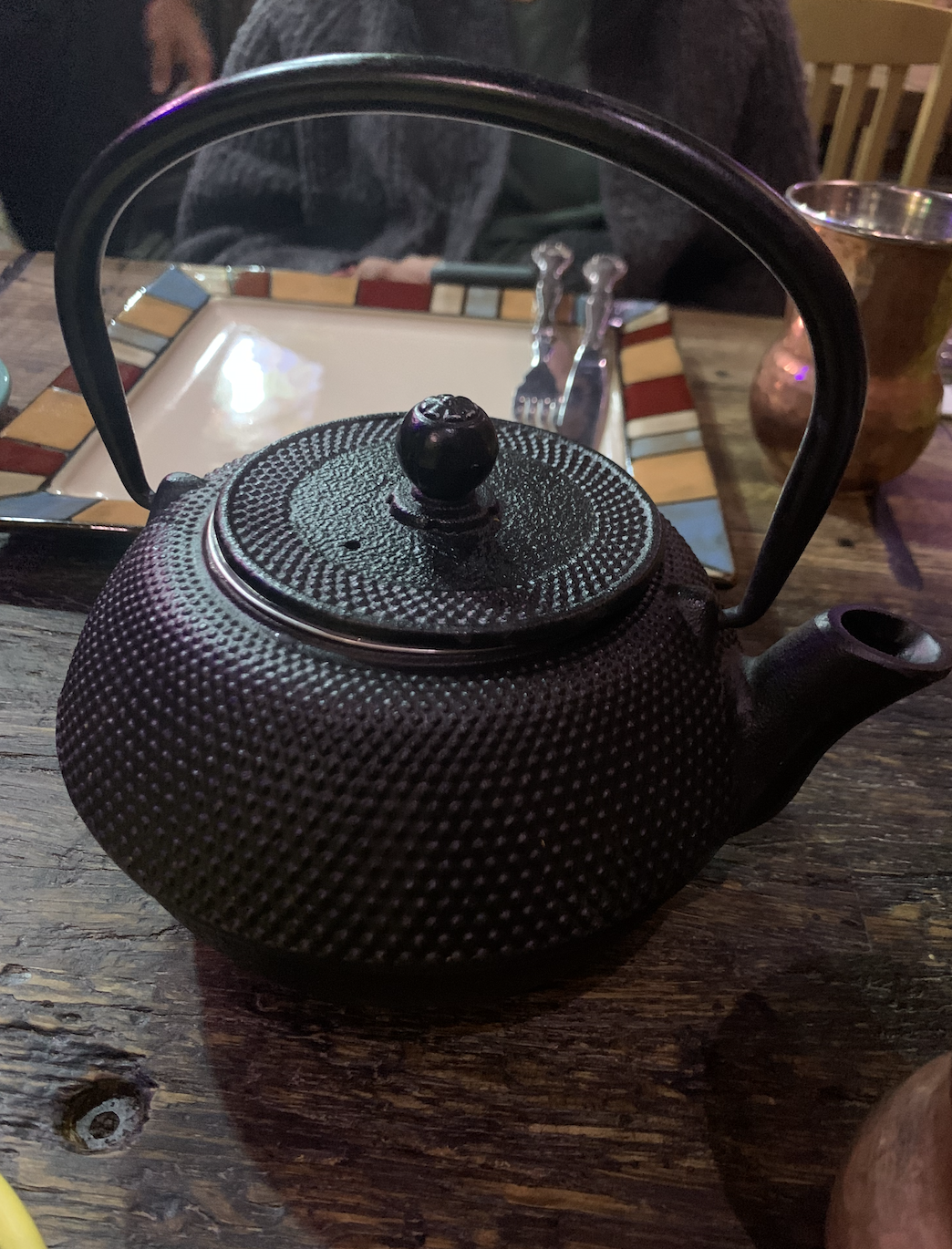 We sipped the chai and found it to be significantly watered down. The chai’s flavor would have come out better if there were more milk and less water. The crocodile tikka masala was strikingly brown, and we could see the vegetables were huge, and the meat was chopped into really tiny pieces.

I quickly took a piece of naan and had my very first of the crocodile tikka masala, and I was not even pleasantly surprised. I was shocked at how good it tastes. The curry itself was spicy but just the right amount. It complemented the crocodile meat, which was very tender and had taken on the flavours of the multitude of spices in the marinade, with a nice smoky hint of fire from the stove.

The chef used bell peppers, onions, and tomatoes, a staple for many Indian curries, but this dish’s heart and soul is the caper sauce. Caper, traditionally used in Mediterranean cuisine, adds in that extra kick in the curry. As I sat there relishing my curry, I knew that my taste buds would not forget this ambrosial flavor for a long time to come. The garlic naan itself is probably the best I have eaten in Alberta. It was white-ish in color with hints of brown here and there. Although the outer layer was crisp and almost charred, the dough inside was soft and fluffy. It was soft and was taken just to the point of it charring to become crispy but was taken out to retain the dough’s softness. The usage of freshly cut garlic on the naan enhances its flavor. The naan was also not too chewy, making it easier to eat along with curry; I also found just a hint of sweetness in the naan, which complemented the curry’s spice. Thus, if anyone finds the curry to be very spicy, the naan’s there to save the day.

We unseal the biryani dish, and the aroma of Bay Leaf, cilantro, and cardamom envelops our table. Saffron streaks the glistening rice that is studded with vegetables. I am a big biryani lover, and there’s a quote amongst biryani enthusiasts, “If someone says true love doesn’t exist, make them taste Biryani.”

Indian Fusion did not disappoint. The biryani was a gustatory pleasure for the palate. Though the presentation was simple, the flavours popped out well. The biryani was warm and not too hot. It might have been that the rice was made before the spices, and the curry was infused in the rice. The rice was non-sticky and clear. We had asked for a spice level of 3, but it was spicier than we expected. We had to place a side order of raita (yogurt) to suppress the chilies’ spiciness. The yogurt was mixed with chopped cucumbers and tomatoes to add some flavor. It was the perfect way to curb the spice levels of all curries.

Indian Fusion is on the more expensive side of the spectrum. Most vegetarian dishes average $16, while the meats range from $20-$29 – The crocodile tikka masala will set you back $26.99 while the biryani was $12.99. The portions are more generous. All the dishes are made from scratch every day, which justifies the greater price. The restaurant was immaculate, and the staff was friendly. The service was notice-worthy as we got our food within 20 minutes. It is family-friendly as well as ideal for romantic dates. There is a huge free parking lot right in front of the restaurant. They also deliver food via Skip the Dishes.

Another noteworthy aspect of this restaurant is its owner’s commitment to social service. There is a board on their back door that invites any and all people in need of freshly cooked meals or a hot cup of tea. This restaurant has won many accolades for its service in giving back to the community. At one point, before COVID-19 restrictions were implemented, they were serving almost 2500 hot meals in a month to the needy.

Overall, the food was mostly good, their experimental menu seems to be working well for them, and I laud them for trying out meats that have never been worked before in Indian restaurants. While the presentation is not par with how the dishes have been priced, the quantities and the taste make up for it. I’d rate this restaurant 4.5 stars and definitely would include this in a must-visit restaurant in Edmonton. It was warming and welcoming, just like a long-lost friend, who you meet every now and then.

Get e-mail notification of new posts